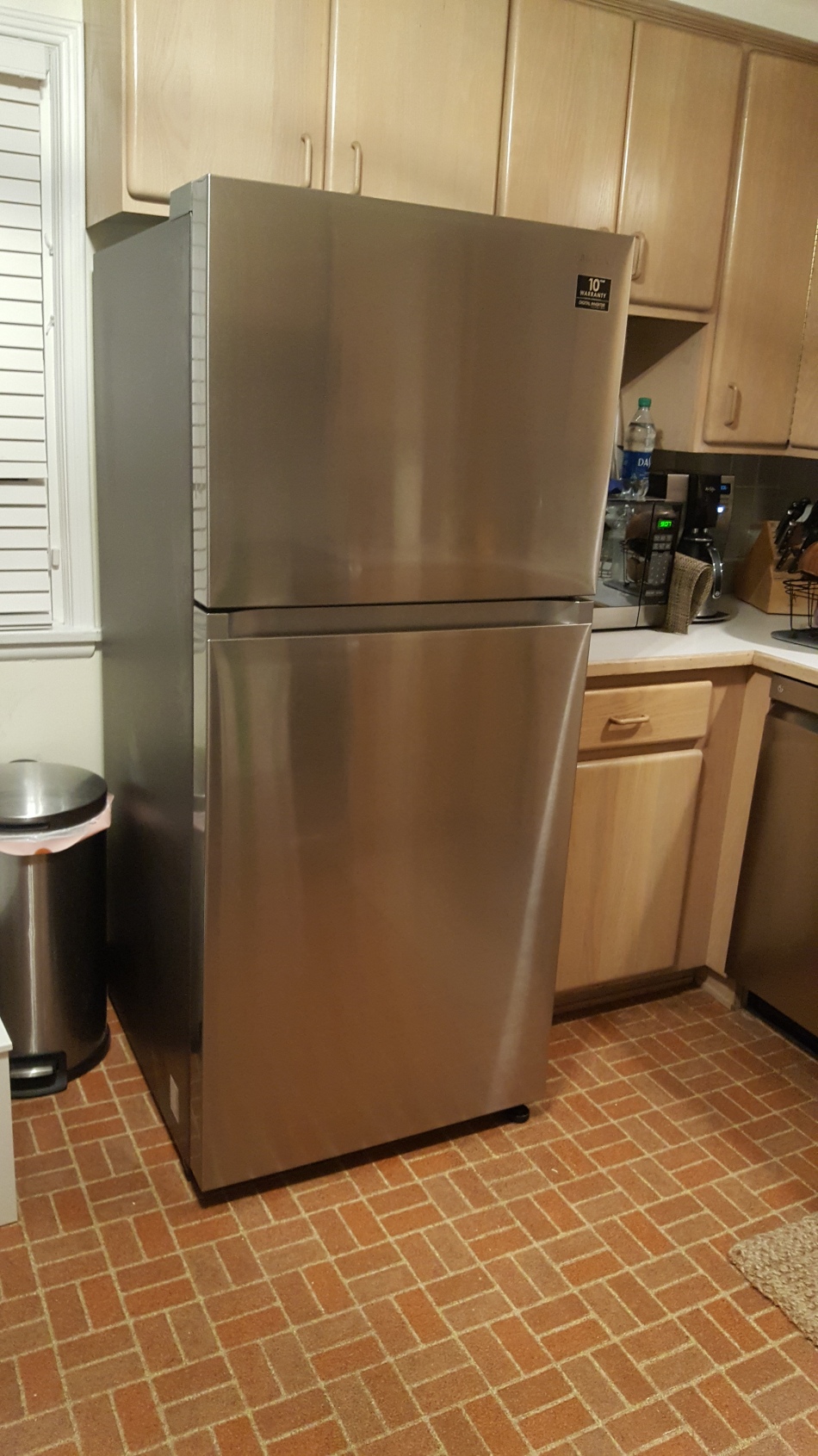 Since moving into our new house, we’ve replaced nearly all the old appliances – not because we’re snobs, but mostly because the old ones were, well, old. One by one, they either failed or proved to be so inefficient that we wanted to be rid of them.

There’s one left to go, and we finally decided to replace it. It is literally falling apart, and has been since the day we moved in. Here’s the door of the old refrigerator.

As you can see, not the best…

With everyone at home under quarantine and our fridge stuffed full of groceries, we were certainly afraid that the old heap would finally kick the bucket. Given that we’re eating all of our meals at home and the weather has warmed up that the garage can no longer serve as an emergeny backup fridge, that was unappealing. It was time for a new refrigerator.

There’s a silver lining to this: technology has improved a lot in the last few decades, and old refrigerators are energy hogs. Here is what clean energy resource teams says about it:

For instance, refrigerators built in the 1970s may use five times more electricity than new, high-efficiency ones and may cost $200 per year more to run than new ENERGY STAR® models. A 20-year-old refrigerator could use 1,700 kWh of electricity every year, compared with about 450 kWh for a similarly sized new ENERGY STAR model. At an electrical cost of 12 cents per kWh, that represents a savings of $150 per year and a potential payback of about 7-9 years. Also, if your old refrigerator requires costly repairs (exceeding a few hundred dollars), then it probably makes sense to replace it with an energy-efficient model.

Is my refrigerator 20 years old? Probably. It is showing a few wrinkles after all.  I’ll be excited to use a lot less energy.

Now, when it comes to buying a new fridge, you should start by thinking about sizing. The general rule of thumb is 4-6 cubic feet per adult, but for me, the most important consideration is whether it will fit in the space I have available in the kitchen, which is a binding constraint. The next consideration is energy efficiency, and when doing my research, I found out something surprising: Top freezers are more efficient than bottom freezers. The reason is that the compressor is located on the bottom of the appliance, and having the coldest compartment next to a heat source is not good for efficiency. In fact, choosing a top freezer rather than a bottom freezer can reduce electricity consumption by 10-25%. Top freezers are also considerably more efficient than side-by sides or french door refrigerators as well because the top is the ideal position for the freezer.

Another non-obvious factor are the water and ice dispensers. Not only are models with these features more expensive, they also result in 10-20% more energy consumption because they make the insulation less effective. Beyond just energy consumption, a fridge with an ice-maker will require a water hook-up, which (unless your house was designed for such things) will require additional work and cost to install.

There’s a lot of hype now about ‘smart appliances’ that can connect to your home wifi. My LG dishwasher, washing machine, and dryer all do so, and so far the only thing I’ve gotten out of it is a little buzzing noise on my phone whenever they finish a cycle. It’s not terribly useful. An internet-connected fridge is probably not terribly useful either. The only feature I’ve seen with any plausible benefit is the ability to run defrost cycles when renewable energy sources are producing their maximum amount of power, but unfortunately most American utilities are not advanced enough to support such things yet.

In the end I picked a no-frills Samsung, which is apparently more efficient when placed in Canada than in the United States. If anyone can explain why that might be true, please leave a comment.

My guess is that it works a bit better in a colder climate. Since we live about 140 miles from the border, I think we’ll do fine.

Now for a little math: 323 kWh / year means 0.884 kWh per day, which equates to about 37 watts. This refrigerator uses about as much electricity as a low wattage incandescent light bulb, if it was left on 24 hours per day. I’m looking forward to a big reduction in energy use here.

Lastly, when you buy a new fridge, make sure the old one is hauled away by a responsible organization and recycled. Refrigerants are potent greenhouse gasses and we really don’t want them leaking into the atmosphere, so be responsible and properly dispose of your old appliance. If you have an efficient model that you’re replacing because of a remodel or something else, you can donate it to charity, but in our case, we’ll be getting rid of it because it’s an energy hog with a hole in the door.

Another bonus: it looks a lot better!